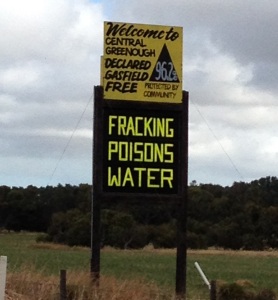 A very powerful message could not be avoided as I drove south from Geraldton. It was a message from the Greenough community to industry, the general public and government, that they do not want fracking in their jurisdiction. In fact, over 90% of this community supported the statement. Despite their message, there is strong scientific evidence that fracking will not impact their water source.

On the long drive home, this led me to think about what could cause this community to have such strong views. We’ve seen people from the east coast and internationally publically state that, despite what government told them and despite outcomes from investigations undertaken by industry, fracking did contaminate their water source. In fact, it could be demonstrated on TV in front of thousands of viewers including myself. So when the word ‘fracking’ is mentioned, we tend to have a mental picture of images demonstrating contamination of groundwater.

Despite the science and the fact that Western Australia is thousands of kilometres from areas where fracking has a demonstrated impact, our communities hold the view that government and industry cannot be trusted on this matter or that they cannot risk the health and welfare of their families by trusting government and industry.

The Department of Mines and Petroleum have embarked on a community education exercise and obviously with little success. On the other hand, the Conservation Council has taken advantage of the lack of community trust and increased their ‘anti-fracking’ campaign, which has ended up in court due to providing misleading information (an inefficient use of their resources).

IF fracking will not impact groundwater and can provide an economic benefit to Western Australia, then what needs to be done to build that trust from communities? Can this situation be turned around or will fracking occur in the most remote areas where one or two people have any opinion?

It may be years before those mental pictures of contaminated water fade from our minds when the word ‘fracking’ is mentioned.