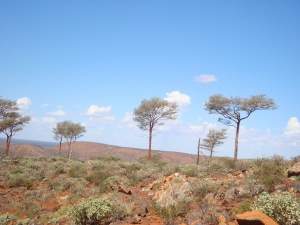 A long time ago, I visited a mining operation. I won’t mention which one but when I entered this site for the first time I was really impressed by what I saw. The site had clear boundaries and healthy vegetation where-ever I looked. The road had been wet to reduce dust, the buildings were clean, lots of positive visuals, good signage and company values in clear view. This was also reflected by the general friendliness of the staff on site. I admit I hadn’t experienced a site like this before. I wasn’t there to conduct a thorough environmental audit so this was just based on first impressions. And I was impressed.

During the course of my visit, we went out to surrounding tenements where exploration had been occurring. My impression there was quite the opposite. There were disintegrating sample bags left lying around (the photo is of a different site, courtesy of DMP), rubbish, half intact signage, no topsoil stockpiles associated with each drill pad and drill holes left without collars and caps etc. etc., you get the idea. What do you think this says about the exploration department of the company?

Here were my thoughts:

This may not be the case but that was my first impression. And generally, that’s also the first impression and thus company reputation that will be carried as government visitors come and go from a mine site, and communicate with each other.

Take a look at your work place. What do you see and conclude about the general first impression of different areas of the business? Do these first impressions translate to risk and costs highlighted above?

As an approvals specialist, this first impression and reputation is an indirect but key aspect of the Approvals process. It is one that often I wish I could have previously been engaged in order to to train and inspire these untidy rascals to take the time and care for the location in which they are working. The effort and cost is minimal in comparison to the scene that it sets for the Approvals process.

As one young, naïve geologist once said to me, “Lara, you will always be too green to know what a true slash and burn geology department gets away with” – true, but I’m the one that the company turns to as a result of Approvals problems associated with that ‘true slash and burn geology department’ because not much gets past the Department of Mines and Petroleum (even though they do their inspections with big smiles on their faces).

These significant Approvals problems could be prevented by SIMPLE housekeeping activities and the geology department (and individuals within it) will have an exceptional environmental record and reputation. The signals being sent to government departments will be:

And what this will likely translate to:

For this particular site, the excellent impression that mining operations gave may likely have offset that of their exploration department. However, greenfields sites and up-and-coming junior resource companies will only have the impression given by their exploration department and associated drilling contractors. So logic says, “Such a small price to pay for benefits to the long term sustainability of the company”.

REPUTATION is IMPORTANT and housekeeping is a reflection of the risk your company is carrying.