Traditionally, the risk of acidic materials was measured by conducting static testing only, or limited kinetic tests such as AMIRA leach columns. In recent years, mining companies carrying a risk of acidic or metalliferous waste materials are often required to do kinetic testing as a component of the Environmental Impact Assessment. The reason for the more extensive studies is that there is very little correlation between the results of static tests and how materials will react in the field, in particular in semi arid environments, as is found in many mining areas of Australia. However these kinetic tests are based on methods that are standardised and in many cases do not provide data that has a high degree of certainty to extrapolate to field conditions. Attempts have been made to “scale” the results of these tests to the field with limited success.

Steven Pearce and O’Kane Consultants have developed a new laboratory technology, which 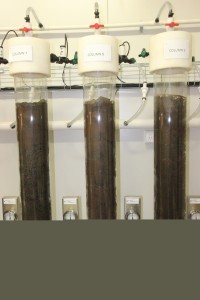 has further increased the ability to predict Acid and Metalliferous Drainage (AMD) issues in advance. The laboratory technology was developed as a result of data obtained from extensive field investigations involving the installation of oxygen, moisture content and temperature sensors into waste landforms to measure environmental variables that increase the risk of AMD. Using this data a new testing method has been developed that allows these conditions to be replicated in the laboratory while conducting kinetic testing. The primary benefit of this innovation has been to improve the accuracy of predicting AMD issues and provide more accurate method of “scaling” results from the lab to the field. O’Kane presented a paper (can be found here) on this topic at ICARD 2015 titled “Waste rock dump geochemical evolution: matching lab data, models and predictions with reality“.

Now this is the really exciting part. Firstly, there are a number of ways to manage AMD:

I originally heard about controlled release from a technical expert within government. Obviously, the team at O’Kane Consultants were also listening because they’ve now designed a system that allows quantitative assessment of the controlled release of AMD into the surrounding environment. This new method uses a quantitative assessment of AMD risk based on waste placement and construction methodology, and allows direct comparison of the net benefit of using a particular construction method for a particular material type. For example, the net benefit with respect to cost and AMD risk, of using a 5m high lift compared to a 10m high lift, or compaction of waste surfaces, can be directly assessed. Now that makes a lot of sense to me. And from what I could see, the cost of this system appears non-inhibitive.

In a nutshell, this is incredibly progressive and innovative technology. Obviously there are still risks associated with this technology. As one colleague pointed out, at the end of the day the success of these innovations comes down to the dozer driver operating in the field and the ability of the field staff to accurately monitor and manage the ongoing operations of the facility (stay tuned, we’re organising a training program in this field). Regardless, this is a step in the right direction and I commend the team at O’Kane Consultants.

I encourage you to contact Steven Pearce for more information (spearce@okc-sk.com) or catch the presentations at the AUSIMM Tailings and Mine Waste Management for the 21st Century conference in Sydney (July 2015), or at the AMR 2015 conference in Adelaide (August 2015).

Our team at EnPeritus are keen to share information about new and innovative technology that will improve the environmental performance of our industry.